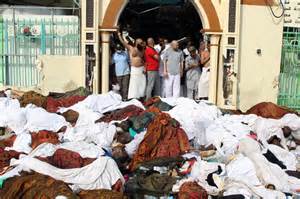 The stampede during Hajj that took place on Thursday morning near Mina two miles away from Mecca during a ritual which may be termed as “stoning the devil” claimed more than seven hundred lives while injuring close to 900 people in Saudi Arabia, according to reports. The footage of the incident is disturbing with piles of bodies, some of which are still moving. Workers are trying to rescue the few who may still be alive.

It is to be noted that in previous years the ceremony has claimed numerous other lives as well and comes in the wave of a crane collapse in the Grand Mosque in Mecca only thirteen days before. The incident is the most fatal in Mina since the incident that occurred there in 1990 which claimed more than 1,426 victims.

The exact figures are stated to be 717 dead and 863 injured but the numbers have seen a steady rise. More than four thousand workers have been deployed at the site in addition to 220 ambulances and supporting vehicles.During the ritual, the pilgrims throw stones at three pillars, an act in memory of the incident where Prophet Abraham rejected the temptations of the devil by stoning him.

The stampede occurred when there was a surge in the pilgrim crowd around 9 in the morning. The
reason behind the surge remained unclear.