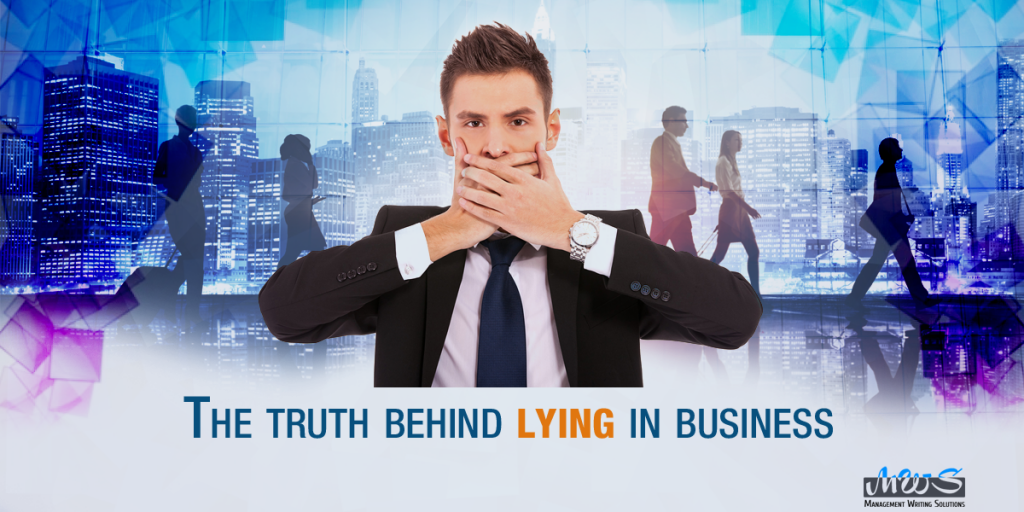 The Truth Behind Lying in Business

Before we carry on with this post, let us ask you one question…

Are you an honest person?

Take this question seriously. Are you really an honest person? Wait till you have the answer before reading on.

The next question that follows is do you sometimes lie?

Now here is the most crucial question: can someone who sometimes tells a few lies qualify as an honest person overall?

Or are we all simply big, fat liars in denial?

When is lying the right way to go?

You may be saying that – of course I’m an honest person, but I do lie sometimes, it is impossible to be honest at all times.

And this justification is definitely a reasonable one. Because there are definitely moments when lying just seems more justified.

Here is a totally irrelevant example of a situation where lying could be very much justifiable – an axe murder is at your door, he is looking for your roommate Jim. He knocks gently and asks you – “Sir, if you may be so kind to tell me where I should find a man by the name of Jim”. What should you do then? Should you tell him the truth that Jim is in the shower?

But isn’t that morally wrong? You could have instead just told him that Jim is upstairs. Your buddy would have been in a really bad spot, but still the truth could be told.

While saying this, let us go on record saying that we are complete proponents of you having to lie about your roommate’s whereabouts to an axe murder. But our point is, one NEVER really has to lie. There is always a choice. The freedom of response is complete with you, even when you do not like the outcome. So, do not hide that aspect from your lying brain.

Where are people going wrong?

The question people ask themselves is “do I have a choice?” but instead they should be asking themselves “is it worth lying”.

There are lies that supposedly all honest people utter now and then. Like lying to your girlfriend/boyfriend about partying late last night, lying to your boss saying you are sick and taking a day off for a movie date, telling a friend that you are on your way to his home, when you’re just getting dressed…and so on.

But why do we lie?

Chances are no polite axe murderer is at your door and no one’s life is at stake when you choose to tell a lie. So, if you have no dire need to lie what justifies those daily slander?

The answer is simpler that you’d like to think. We lie because it is convenient. It offers us with advantages easily.

We often take pride in the noble white lies we tell others to protect their feelings. But truth is 99 percent of the time when we lie; we are solely benefitting ourselves while playing a trick on others to make them believe something that is not true.

The convenient moral justification for lying is only at the extremes. Almost all of the moral and noble excuses that we give every day is just a veiled attempt to get what we want but still feel heroic and virtuous about the act.

So, to sum it up, we do not lie because we absolutely HAVE TO, but because it helps with our own interests.

Before you stop reading thinking that this is one of those relentless ranting blog posts speaking about honesty being a pillar of success. Then wait awhile. We do not intend to turn you into honest Abe with just one overly written blog.

We do not advice you to begin being honest and say everything that pops into your mind. That is just an excuse for people to be abrasive and is in fact not strictly honest. After all your red might not be my red!

Instead of having full-fledged honesty you need to have practical honesty.

What is practical honesty you ask?

Practical honesty is not about saying the absolute truth at all times. That would just be you being a serial joke-killer. It is also not about saying every thought in your 2.5 kgs of cauliflower as it is. To think about it, it is completely unproductive and is also dishonest because the truth shifts as we further consider it.

Being practically honest means saying all meaningful truths in the most productive way possible.

This will need empathy, and you must be able to distinguish what is meaningful for other people. You must also be able to recognize that meaningful is not just a static word but it shifts over the course of the interaction.

How to start being practically honest?

In closing thoughts, for all your life you will have to make the choice between the right thing and the easy thing.

What you choose will dictate how things pan out for you…